The summers of 2019/2020 were definitely the season of the gypsy moth! While at your cottage/home you may have been inundated with a plethora of these little moths from the beginning of July until almost the end of August. The following provides some history and biology of this invasive pest.

The gypsy moth is not native to North America. The gypsy moth that we find mainly in Ontario, Quebec and the Maritime provinces was introduced into the USA around 1869 by a French naturalist attempting to cross the European gypsy moth with North American silkworms, with the hopes of creating a silk industry in North America. The native silk-spinning caterpillars were susceptible to disease so the thought was to bring over the gypsy moth eggs with the intention of creating a caterpillar hybrid that could resist diseases. Some of the moths escaped and eventually found their way into Eastern Canada.

So why is the gypsy moth a problem? They are very destructive and (as their name suggests) can travel far and wide by attaching themselves to a variety of objects. Their appetite is insatiable, mainly enjoying 500 species of the broad-leaf trees of red and white oak, poplar, and white birch with the ability to completely defoliate and kill large amounts of these trees. They have also developed an appetite for some conifers. The larvae can chew small holes in leaves or completely strip a canopy. It is estimated that during the larva stage one square metre of leaves can be devoured! Tree losses greatly impact our forests by affecting the many benefits provided by them. The destruction of oak trees greatly impacts wildlife, especially deer that depend on acorns to provide them with the necessary nutrition to survive our winters. The related forest industries are economically impacted as well. And because gypsy moths are not native, they do not have many natural enemies.

Gypsy moth infestations are cyclical, coming in waves every 7 to 10 years or so, with most infestations lasting approximately three years. The last bad wave was in the early 1980s.

With the last infestation a fungus was produced which helped to keep the population in check by causing a fungal disease in the caterpillar. This fungus requires a great deal of moisture, something we have not seen in the last couple of years. Even though we had a very wet spring this year, more wet springs are needed in order for the fungus to get established. As a result of a few dry seasons, a massive number of moths laid eggs in 2018 with the result of us seeing millions and millions of caterpillars hatching this spring.

However, there are things we can do to keep this invasive species in check. First, we have to know what to look for. There are four developmental life stages of the gypsy moth: egg, larva (caterpillar), pupa and adult. 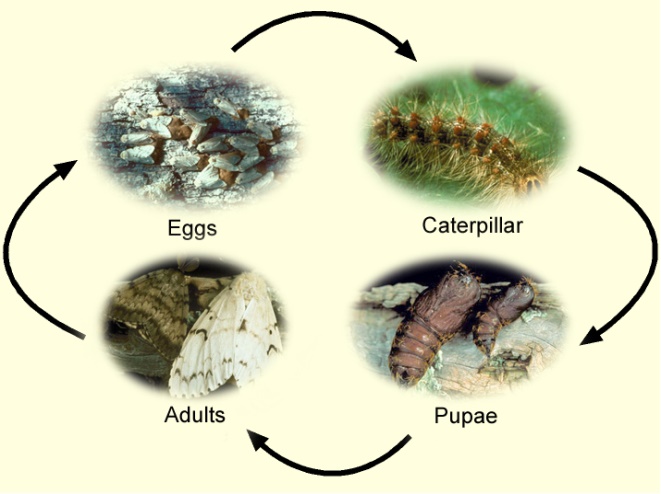 Eggs are laid in sheltered areas toward the end of summer by the adult moth. The male is greyish brown. It can fly and survives about one week. The adult male can mate with several different females during this time. Females are larger than the male, whitish in colour with darker zigzag marks than the male. The female does not fly well and will die shortly after laying her eggs.

Locating egg masses is very important in the eradication of the gypsy moth. The moth hibernates in these egg masses which may contain from 100 to 1000 eggs. The egg masses are covered with hairs tan and buff in colour. They can be found in many places including tree trunks, bark, outdoor furniture, tents, trailers, sides of buildings, the underside of branches, fences, firewood, swing sets, boats, under eaves of buildings, and many more hidden places!

The following spring, when tree buds begin to open around late April or early May, the young caterpillars emerge with their voracious appetites. The caterpillars or larvae change the way they look as they are growing. From 0.6 cm and black and brown, the caterpillar develops bumps along their backs with coarse hair as they grow. In the latter part of this stage the caterpillar is charcoal grey in colour with a double row of five blue and six red dots on its back. This stage can last up to seven weeks. The larvae spread easily by being carried on wind currents or hitching a ride on objects, thus earning the name “gypsy” moths.

After wreaking havoc on your trees for about a month, the caterpillars rest in their pupae cases. During July or August, they emerge as white or brown-winged moths and prepare to lay eggs, starting the whole process again!

Do you know what you can do at each developmental stage to rid yourself of the gypsy moth? Here are a few recommendations: